Ramadan Talks is a series in which we interview Muslims from around the world about Ramadan. Here’s Pakistan!

To begin with, can you briefly introduce yourself?

I am Ali Ahmad from Pakistan, I come from a city called ‘’Sheikhupura’’. I’m a Master’s student at Marmara University, Istanbul. I moved to Turkey almost two and half years ago and currently, I’m in Frankfurt for my research project.

COVID-19 Pandemic has turned our lives upside down. Almost all sectors of life got affected by pandemics.  Similarly, the religious life of people also got affected and during last year there was less participation of people in religious practices, festivals and ceremonies. As we know all over the world there were restrictions imposed on social activities to control the spread of pandemics. Similarly, In Pakistan people were asked to spend more time at home and not to go to the big gatherings. Mosques were open but there was a limitation of people to gather in the mosque at one time. Most of the people were not willing to go to mosques because of fear. There was hype on media about COVID-19 spread which of course made people frightened. So, in general, Pakistani society has been severely affected by pandemics and almost all the social activities were restricted.

How is Ramadan in Pakistan?

Ramadan is a special month in the Islamic calendar. It is the month of fasting for Muslims. Ramadan comes with blessings and people try to purify their souls and get closer to Allah during this blessed month. Muslims try to benefit from this blessed month in different ways: By giving more charity, observing special prayers, arranging spiritual gatherings and arranging Tafseer (Commentary of Quran) seminars, Public iftar gatherings at mosques, doing I’tikaf in the last ten days of the month etc.

In 2020, unfortunately, due to pandemics most of the social activities were called off and public gatherings were banned which affected religious practices as well. People couldn’t participate in typical Ramadan activities like Public iftar at mosques, taraweeh prayers, I’tikaf during the last ten days and so on.

Other than religious activities, people arrange some social events at late nights like playing different games, those activities were also banned because of the strict lockdown.

So, we can say it was a completely different experience. And for sure it was not a good experience.

Back at the time before the pandemic, how was the holy month of Ramadan in Pakistan normally? What did people do and how did they make use of the month?

Throughout the Muslim world, Ramadan is considered a special month. Similarly, Pakistani people also value this month so much and observe this month in the best way possible.
In Pakistan, Ramadan unites the community as people get enthusiastic to participate in special events which are organized in this blessed month.

Can you tell me about suhoor and iftar times?

There are different ways people follow to know the starting and ending times of the fast. Like using mobile applications or having an Imsakiye. But in Pakistan, there are two traditional ways of announcing suhoor and iftar timings and I found them different from Turkey.

Do you organize public iftar gatherings? How do you feel about them?

It’s one of the beautiful traditions that the community organizes big iftar gatherings in mosques where people from different walks of life come and have iftar together which brings a sense of unity among people.

Another practice I would like to refer to is iftar dinners by NGO’s, in which mostly rich people participate and collect money for charity purposes.

How do fasters and non-fasters coexist smoothly? Do restaurants still operate, for instance?

In Pakistan, people pay huge respect to the fasting people. People who cannot fast due to their personal reasons at least try to show respect to the fasting people and don’t eat in front of fasting people. And out of respect to fasting, people restaurants remain closed throughout the day. For the people, who do not fast some restaurants provide meals but in private so no fasting person can see them eating. Another important thing to note is that people who do not keep fast feel embarrassed to eat in public because they feel a sense of guilt in them because of not following the teachings of Allah and not practising one of the important pillars of Islam. That’s also the main reason that people who don’t fast, still don’t eat publicly.

As far as I know, you have lived both there and in Turkey. How do you compare the two in terms of Ramadan experience?

Let me mention some important differences I observed during my Ramadan here in Turkey and Pakistan:

In Turkey, I noticed that women pray Taraweeh and a big number of children come with their parents to mosques for special night prayers. While in Pakistan women usually don’t go to mosques for prayers.

Another difference with regards to Taraweeh prayer is that, In Pakistan, In all mosques, the complete Quran is recited in Taraweeh prayers while in turkey there are only specific mosques in which khatm al Quran is done while in other mosques imam just recites randomly from Quran and finishes the Taraweeh in a quick manner.

Another difference I observed is with regards to charity work. I think Turkey’s welfare organizations are more organized and work on a large scale during Ramadan. Turkish NGO’s not only work within Turkey but also focus on other Muslim countries and help them out. While in Pakistan, welfare work is done mostly on a local level and unfortunately not done as systematically as it’s being done in Turkey.

Do you have Pakistani customs during Ramadan? For example, Güllaç and Pita are the first to come to mind in our country. We also fire a cannonball to indicate iftar time, just before the adhan. Drummers used to walk around the streets during suhoor to wake people up, too. What culturally specific things enter your lives in Ramadan?

We have some typical Ramadan snacks and beverages. Samosa is one of the most famous snacks among Pakistani people during Ramadan and Roh-Afza and Sakanjabeen (lemonade) are famous beverages in Pakistan. Lassi (Ayran) is considered an important part of Suhoor and almost every household makes it in suhoor.

How do you spend Qadr Night?

Laylat ul Qadar is one of the important nights in Ramadan which is intact one of the reasons which makes Ramadan so special and blessed. On Laylat al-Qadr mosques are being ornamented with lights. Special gatherings are being organized in mosques in which the imam talks about the importance of Laylat al-Qadr. Sweets are distributed among the attendees. Salat ut tasbeeh (special prayers) is offered in mosques.

Do you have national holidays for eid? How do you spend it?

Yes, Eid days are public holidays in Pakistan. After Eid Prayers, people like to spend time with family and friends. It’s a very festive event, especially for children. They meet the elderly and ask for ‘’eidi’’. Eidi is special money given to children by elders on the occasion of Eid. People from urban areas travel back to their villages to spend these holidays with their relatives. Special dinners are arranged among families and friends.

What changes in your lives during Ramadan?

Ramadan is a month of spiritual training for Muslims. It gives us the opportunity to return to Allah and make our lifestyles Islamic. Generally, Muslims get involved in religious practices but soon after the month finishes they return back to their normal life routine and don’t bother much to maintain the religious discipline which they used to do maintain during Ramadan.
But for some people, it really becomes a life-changing experience and they change their lifestyle completely and become more practising Muslims.

I pray to Allah the Almighty that this Ramadan becomes a source of change in our lives and we become closer to Allah. 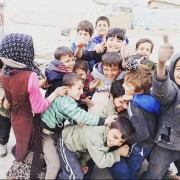 What Makes a City an Ottoman City

The ‘Get a Quran’ Project Has Taken Off in Australia

A Debt of Loyalty Paid in a Dorm Room

Support from Australia for the Islamic Arts Museum